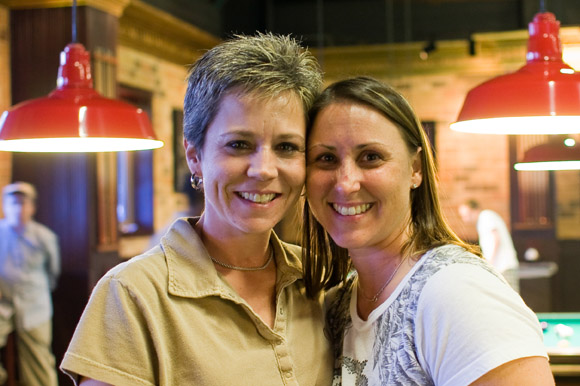 Fast Eddie’s in Round Rock, Texas was the scene for the 8th OB Cues Ladies Tour stop the weekend of October 9th-10th. In fact, this was the second time this year that they have hosted the OBCLT event and we greatly appreciated their fantastic food, hospitality and friendly faces from the management and staff. Thank You Fast Eddie’s Round Rock!

Also special thanks to our main title sponsor, OB Cues, for providing the opportunity for amateur lady pool players all over the country to be able to participate in such a fun-filled, competitive, and memorable event year after year. Thank You OB Cues!

Players from Texas, Arkansas, Colorado and Illinois were anxious to participate in this guaranteed $2000 added monies 9-ball event. A welcome surprise to the tour was the presence of Samm Diep from Denver, Colorado and everyone’s favorite pool mascot, Frank from Pool Dawg. Frank was around all weekend sweating the action along with other tour fans, supporters, and family members, cheering on the 38 players competing for the 1st place prize of $750.

As the Main Event approached day’s end on Saturday, 8 players were still left standing. Winner side matches for Sunday morning would be Helen Laiche vs. Michelle Cortez and Lisa Marr vs. Amanda Lampert. One loss matches also on Sunday would be Orietta Strickland vs. Kim Pierce and Rachel Hurst vs. Nancy French. On Sunday morning, Helen and Michelle battled it out with a hill-hill score and Michelle prevailed as the winner and very excited about playing in the hot seat match. Amanda, recent winner of the Houston Open from the previous weekend, was playing lights out and soundly defeated Lisa 7-2 to earn her spot in the hot seat match. Amanda then won the hot seat with a score of 7-0 against Michelle; she would wait to see who her finals opponent would be.

As the one-loss matches continued, it looked like it would be a rematch of the hot seat match as Michelle was ahead of Lisa in the semi-finals. Unfortunately, the rolls, which were bothersome to both players, left Michelle coming up short and she was defeated by Lisa 7-5. Michelle had a fantastic event though and scored her highest tour finish ever. She will undoubtedly always be a force to reckon with, so keep up the good work. Congratulations Michelle!

The finals match was a battle of the speeding tickets. We teased both players as they both had unfortunate run-ins with a radar gun recently so they both had extra pressure and incentive to win this event to pay off their lead foot incidents. In true double elimination format, Lisa would have to defeat Amanda twice to win. As the match progressed, it looked Lisa was trying her best to take it to a second set as she was up 4-1 early. But Amanda was not having any of it and she kicked into gear to tie up the set. When it was 4-4, it seemed Lisa was going to force the second set when she took the lead at 6-4, but Amanda once again dug deep. She took advantage of a miss by Lisa to draw closer at 6-5, then broke and ran to tie the score at 6-6. The excitement and pressure was growing as the final game became a battle of strategic safeties, a waiting game of who would make a mistake first. With just the 7-8-9 left, Lisa made a tough 7-ball in the corner but the cue ball rolled within an inch of the 8-ball, appearing to end her chances of the potential run-out. She deliberated as to what she was going to do, committed to the shot, then made a precise 8-ball shot in the side pocket and was left a long thin cut on the 9 to force the second set. Unfortunately, she missed the 9-ball giving Amanda a clear shot to pocket the 9 in the corner for her 2nd tour win. Congrats to both Lisa and Amanda for the crowd pleasing, superb match play all weekend.

Join us November 13th & 14th at our Championship Stop of 2010 on at Casper’s Billiards in San Leon, Texas.

Check us out at www.obcuestour.com
Sponsored by OB Cues www.obcues.com

A Second Chance event was held with $250 added monies.