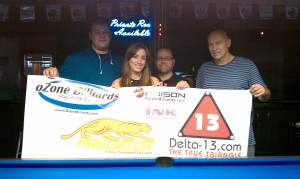 However, John Hacsi, one of the oldest players on the tour, would be the player to go through the winner’s bracket unscathed, grinding through several tough matches. John defeated Joe Morace 7-5, Gene Hartnell 7-1, Neslihan “Ness” GÃ¼rel 7-6, Meshak Daniel 7-2, and Christian Smith 7-4 to earn a spot in the hot seat.

Another strong showing was put on by “Queen B” Borana Andoni as she showed a lot of heart, with two big comebacks. Borana grinded back from trailing 6-3 in the first round against Sam Li, showing heart and grit in her game early on.  “Queen B” then went on to defeat Carlos Alvardo 7-5 and Pam Ogarek 7-3, b

Borana then bounced back in her first one-loss side match from another 6-3 deficit, earning her a spot in the second day of the two-day event. On Sunday, Borana defeated Neslihan GÃ¼rel in a close hill-hill 7-6 nail biter. Ness had an opportunity to get out of the set to claim the win, but her display of focus, smart play, and willingness to bounce back only barely failed her.  As Neslihan continues on her journey as an aspiring pro in the US, her solid foundation shows a promising future.

Following up her win aga

inst Ness, Borana avenged her winner’s side loss in dominant fashion, defeating Meshak Daniel 7-3 before losing to Stewart Warnock 7-5. This 4th place finish makes “Queen B” the highest finishing female in the tour history.  This is also another very notable finish for Stewart Warnock, who currently holds the #1 position in the “A” Class on the Predator Tour.

After defeating Borana, Stewart Warnock moved onto the semifinal, where he would have to settle for third place after a 7-3 loss to Christian Smith.  In the final match, John Hacsi soundly beat Christian Smith 7-4 to claim the win, undefeated.  Had Christian made it to seven games first, the race would have been extended to nine games.

Congratulations to John Hacsi on his dominant win, taking home the $1,000 first prize, along with Christian Smith for a strong runner-up finish.  John, who only recently made a return to the game after a 40 year hiatus, has been proving on the Predator Tour that he still has what it takes… he currently holds the #2 position in the points standings for the “C” class.

to deal with some pain during this event, John Hacsi pushed through the tournament undeterred. Also, if you noticed a renewed spring in John Hacsi’s step, it is because he has found a new love in his life in his baby grandaughter, Brooke who visited him during the tournament!  And as John has mentioned, this joy has definitely been reflecting in his pool game! 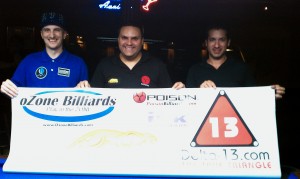 “Get Some” Shaun Wilkie, who just came off a great 2nd place finish at last weekend’s Maryland State 14.1 Championships, went through the winner’s bracket with wins over George “Ginky” SanSouci 8-4, Kevin Guimond 8-7, and Tony Robles 8-7, earning him a spot in the finals undefeated.
Ginky bounced back from his second-round loss to catch a major gear with a series of dominant wins. The top NY player rolled over Evan Broxmeyer 8-0, Raphael Dabreo 8-1, and Wali Muhammad 8-1 before losing to Zion Zvi 8-3. In the match between Ginky and Zion, Ginky jumped out to a 2-0 lead, and was in complete control”¦ before an unlucky kiss led the cue ball to scratch. That would end up to be the turning point of the set, as Zion turned the tables and took control of the set to win 8-3.

The next stop on the tour’s schedule will be held at the Amsterdam Billiard Club on July 24-25th.