Multi-Winners Abound at the 2010 ACS Nationals in Las Vegas

So many divisions!  So many winners and multi-division champions!  As with each of the six National Championships produced by the American CueSports Alliance (ACS) – and this year welcoming its new league and championship sponsor: Lucasi Hybrid Cues – the annual spectacle at the Riviera Hotel & Casino in Las Vegas, June 6-12, showcased formats that encouraged many different winners”¦in many different formats”¦for many different skill levels”¦along with multi-titlists in the higher-skilled divisions. 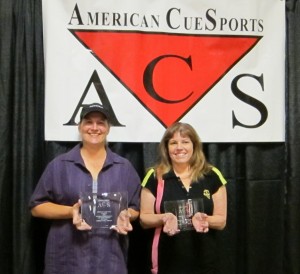 In 2011, the ACS is excited about moving the newly titled Lucasi Hybrid Cues ACS National Championships to the newly renovated Tropicana Las Vegas – a month earlier – May 7-14 !  Players will be royally entertained at this legendary anchor on the southern Vegas strip that is transforming itself into the best modern, mid-priced value in Las Vegas.  The ACS looks forward to continuing to build its ranks in 2010/2011 through its twelve state associations and championships and its independent leagues, its Lucasi Hybrid All American Tour, and to welcoming players to its $10,000 added 2011 Midwest 8-Ball Championships, January 20-23 at the Riverside Casino in central Iowa, and to the 2011 ACS Nationals at the Tropicana Las Vegas in May !!  Complete results and winners photos may be viewed online at www.americancuesports.org.