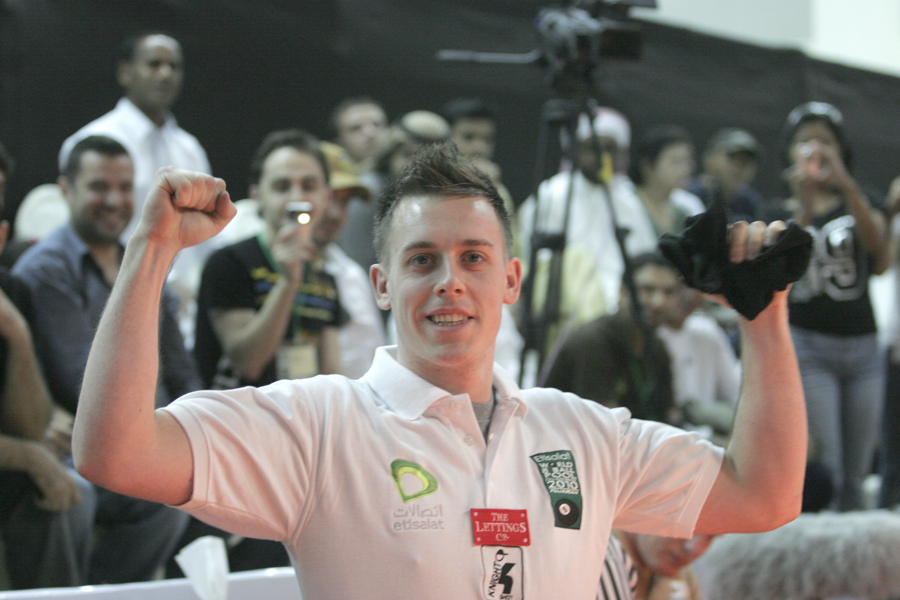 The World 8-Ball Championships final was a run-out fest between Niels Feijen and Karl Boyes. The First rack had a bit of back and forth action and was taken by Boyes. Then he broke and ran three consecutive racks to lead 4-0. When he came up dry on his next break Feijen ran the table and then broke and ran the next rack. 4-2. Then Feijen suffered a dry break and Boyes cleared that table and broke and ran the next. Another dry break brought Feijen back to the table to clean up. With the score at 6-3 Feijen broke but the table came up tough. He missed his second shot at the table and Boyes returned the favor by missing his second shot attempt as well. Again Feijen came to the table and again his second shot failed. The table simply was not being at all generous with opportunities. Boyes studied the table for a while and jacked up for a nifty little nip shot into the corner that gave him the chance to clear the table. When he succeeded the score became 7-3 in our race to 13 and Feijen was in trouble deep.

Two more break and runs for Boyes brought his lead to 9-3 before he had another dry break and Feijen did a marvelous job of breaking out two trouble balls in order to get himself the point and bring the score to 9-4. Feijen then broke and the balls again came apart poorly. It was a struggle to get through the rack and Feijen scratched on his fourth ball, giving ball in hand to Boyes. Boyes had no problem clearing the table to gain a 10-4 advantage. Another break and run brought Boyes to 11-4 but then his next break came dry and Feijen needed to get some momentum going. Feijen managed to clear that table and then put together some break and runs of his own. A great little nip shot on the final ball in game number 18 brought him hope as the score narrowed to 11-7.  Feijen followed with two more break and runs to bring the score to 11-9 but then broke dry.

Boyes took that table but then broke dry himself. Feijen ran the table out. Then Feijen jumped the table on his break shot and Boyes had ball in hand to win the Championship. On his fifth shot he was off just enough so that the draw shot wound up with him snookered behind the two ball. He missed his attempt at a good hit and with the ball in hand Feijen ran out to take the score line to 12-11. Feijen mad a ball o the break but the table was anything but easy. He studied his way from ball to ball and wound up with a tough cut on the 14. He took a lot of time to get comfortable with the shot and nailed it. He made the next shot but left himself a tough cut on the 11 to finish off his set of balls. He made it but came up just short of position. Another tough cut. But he dropped the 8 ball and we had a double-hill final with Feijen breaking.

Feijen came to the table knowing that his break had failed him several times before. It failed again. He broke dry and Boyes came to an open table. You could see the tension of the moment robbing Boyes arm of its trustiness. He missed position on his first shot and only had one shot to choose from. But he made that and then looked good to clear it up for the win. The final four balls were fairly easy ones and Boyes confidence was coming back quickly. They all dropped and then Boyes began to feel it. He walked back to his chair, shook Feijen’s hand and then gave us a double fist pump to celebrate moment. Karl Boyes, Champion of the World.