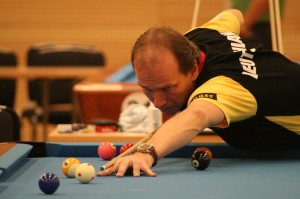 Parsippany, New Jersey- Europe’s iron grip on straight pool this millennium doesn’t seem easy to shake even this year with 2007 World 14.1 Champion Oliver Ortmann, 2006 World 14.1 Champion Thorsten Hohmann, and World #1 Mika Immonen all aiming for the crown. The Dragon Promotions revived event is in its 4th consecutive year alive with help of industry giants such as Predator, Ozone Billiards, Brunswick Billiards, Simonis Cloth, Master Chalk, Aramith Balls, Accu-Stats and the Laser Rack. Comet Billiards will host this year’s event which will start play on August 24, 2009 and end August 29. The greatest straight pool players from around the world will arrive on USA’s east coast again to New Jersey, and attend this prestigious event to play for the coveted title of World Straight Pool Champion.

If there is one country that can be said is the dominant force in 14.1, that distinction would goto Germany. The last US Open 14.1 Champion was held by Oliver Ortmann, and then in the 2006 revival of the World 14.1, Germans Thorsten Hohmann and Thomas Engert both dominated for Gold and Silver. In 2007, again Germany’s Oliver Ortmann won the Gold.

“It would be great to win the 14.1 title twice after the US Open straight pool title twice.Straight pool is my desire and to win a world championship title in my favourite game. This means more to me than to win a title in other disciplines.Straight pool compared to 9 or 10 ball is more a game of “let the cue go”. The strategy is obvious and the goal is to get in stroke to follow your own way to the breakball. 9 or 10 ball is always a game of different strategies and luck is necessary as well. The better player not always is the winner”, explained Ortmann on the different nuances of 14.1 compared to the more popular rotation games. Ortmann, known as “The Machine” will be coming into this year’s World 14.1 Championship as the #2 seed.

Finland’s one shining star has been more than enough the past five years. Mika “Ice Man” Immonen has been Finland’s lone soldier, but has been more than the world can handle recently with a string of wins and finals finishes. The 2008 Pool & Billiard Magazine, Billiards Digest, and Inside Pool Player of the Year has maintained his #1 status into 2009. Immonen is well versed in straight pool with a European Straight Pool Championship under his belt as well as Bronze at the 2006 World 14.1 and 5th and 9th place finishes. Immonen also was runner-up in back to back Mezz Classic 14.1 events. But the World Championship title in 14.1 has eluded him. What does winning the event mean to The Ice Man?

“Of course it would be nice to seal the deal and win the World 14.1 title. I did win the European title in 1998 beating no other than Ralf Souquet in the finals there. I feel like I have been close like a few years ago at 3rd but lost semi versus Thomas Engert. I just have to keep doing what I have been doing the whole year and I thin I have a chance. I know the game. I just need to be mentally steady. In 14.1 it doesn’t take much and you either steal the set or feel it slipping away. Last year I played steady until the single-knockout. This year I want to prove that I can maintain. Additionally it would be nice to be recognized as an all-a-round great player” said Immonen. He will be coming in as the #3 seed.
” Seems like we have a great field coming up in this year’s World Championship, so it should be fun. The winner is definitely deserving of the title. ” 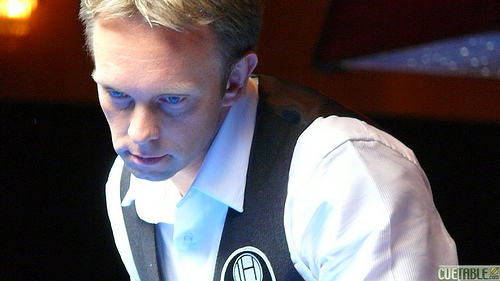 The #1 seed of the event is no doubt Germany’s Thorsten Hohmann. Hohmann’s name has been almost synonymous with straight pool these past few years. “The Hitman” has won the European 14.1 Championship, the 2008 Lucasi Classic 14.1, annihilated the field of 14.1 champions in last years Accu-Stats 14.1 Invitational, and of course became the first non-American to win the World 14.1 title in history. Hohmann also holds the world record for biggest run of 176 during a World Championship.

So how does one handle the pressure of being the #1 favorite?

“There are so many players out there that can run 150 balls and out. Nobody can claim to be the best. I wouldn’t say that I am THE favorite to win the title, but I have always performed very well at the World Straight Pool Championship and also Comet Billiards, and I am expecting 100% effort from myself also this time. I am looking forward to play some Straight Pool and whoever wants to beat me will have to play their very best,” said Hohmann.

Strong words from a strong player.

“Oliver has so much desire and determination in straight pool. He’s made history many times for Europe internationally. The man is an icon. Mika is #1, and has been the man to beat the past year and a half, and I know he wants to win the World 14.1 and show he’s not just a killer in 9-ball/10-ball. And when he has a goal, he always eventually meets it,” commented USA top pro Charlie WIlliams who is also the co-producer of the event. “And Thorsten, well…..he IS Straight Pool.”

There will be one last qualifier and opportunity to play in this historic event. The final qualifier will be August 22 at Comet Billiards, which is the same venue as the main event The World 14.1 Championship. Players are to be signed up by 11am.

The main event August 24-29 format will be 48 players round robin race to 100 the first 3 days. Half the field will be cut and the final 24 will play a double elimination board race to 150, with the #1 seed in each group from round robin getting a bye first round. 16 players will make it out of the double elimination board and advance to the final stage single elimination race to 200 points.
This year marks the 69th World Tournament for 14.1, and stars such as Thorsten Hohmann, Oliver Ortmann, Johnny Archer, Tony Robles, and Mika Immonen are just a few of the powerful list of world beaters who will come to play in the greatest straight pool tournament in the world.

August 28 at 5pm, the night before the finals, Comet Billiards will host a special sponsor / pro team match tournament for the patron sponsors of the event. Billiard aficionado Stu Mattana of NYC and long time billiard supporter Harold Siegel of NYC are two of this year’s generous patrons of the Predator World 14.1 Championship. Their contributions are helping keeping the event going. Dragon Promotions encourages others to come on board to join as a sponsor and can be reached at worldstraightpoolchampionships@gmail.com or call 1-407-782-4978

Ozone Billiards has been providing pool players with top quality billiard products for more than eight years. Its commitment to customer service has helped Ozone Billiards grow to be one of the largest retailers of billiard supplies in the United States. For more information about Ozone Billiards and its product lines, visit www.ozonebilliards.com