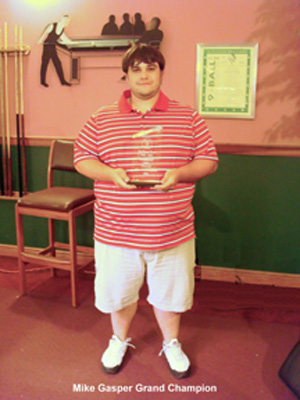 The twelveth annual Tri-State Tour Invitational took place July 11 – 12, 2009, at Comet Billiards in Parsippany, NJ bringing together highly skilled amateurs hoping to sharpen their game en route to the pro circuit and ambitious upstarts looking to advance in class. The weekend was a huge success with 14 A & A+ Players, 32 B & B+ Players, 32 C & C+ Players and 14 D & D+ Players showing up to play in their respective classes. Comet Billiards owners Bill Haley along with the staff were gracious hosts and provided a professional and engaging atmosphere for the event. Their generosity and support is without equal. The room donated shirts to the event along with their room and all the table time. Not enough positive and complimentary things can be said about Bill or his establishment.

As each day began, organizers John Leyman, Todd Fleitman & Bill Focaccia congratulated the players on reaching the top of their classes for the season and handed out awards to the top players of the year in each class. The Tri-State Tour added $4000 in cash prizes and the sponsors Viking Cues, Fury Cues, Stealth Cues, Sterling Gaming, Ozone Billiards, Wild Eyes Creations, Pool Tees.com, Jim Murnak Custom Cue Cases, Billiards Digest, Pool & Billiards, Inside Pool, Professor-Q-Ball’s News, Blue Book Publications, Stroke, Human Kinetic, Amsterdam Billiards and Romer’s Trophies went out of their way to provide the event with some great equipment and prizes. All of the sponsors are owed a debt a gratitude for their dedication to the game and the players, their efforts and generosity are what made the event so special and such a great success. The awards went to the top 3 players in each class and to the Most Improved Players of the Year. The top players of the year in the their respective classes were Daniel Cintron, Gary Murgia, Tony Eglesias, George Osipovitch, Dave Fitzpatrick and Amy Triolo. The top female player of the year was awarded to Rhio Anne Flores. This year a stand out most improved player of the year could not be identified and so the 3 top contenders, Daniel Cintron, Rhio Anne Flores and Ben Sadowski were all awarded Most Improved Player awards. The Pro/Open class was won by Mika Immonen. (for a full list of winners for all the classes please see the web site www.thetristatetour.com). The tour each year gives out an award to a player we think exemplifies what is good about the sport and this year’s Sportsman ofthe Year award went to Dave Fitzpatrick. 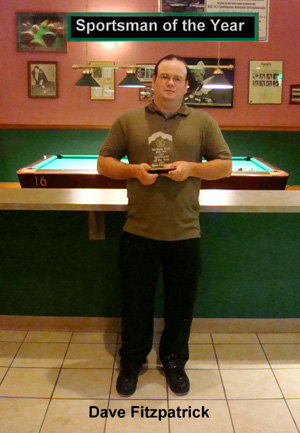 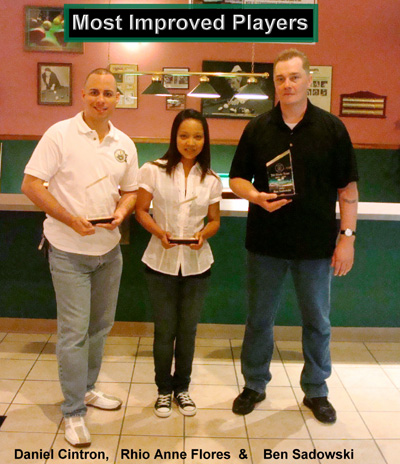 The action in the tournament got going around eleven on Saturday morning, with B+, B, C+ and C class players kicking off the event. The B+, B, C+ and C classes were all won by players who went undefeated for the day. In the B+ class, Mike Gasper played strong and consistent all day and dominated all opponents including in the finals against Robert Kight, which Mike won 7-3. This seemed to be the trend for the day as Jacob Schwartz bested Phil Carr in the B-Class finals 7-2. While in the C+ class T.J. Smithers took advantage of good table rolls to beat Teddy LaPadula 6-3. The C Class finals provided and interesting turn of events as John Egeln reached the finals undefeated. As it turns out, in the final event of the regular season Mike Scholven played well and moved up in the rankings and knocked John Egeln to 17th place and out of the Invitational’s. But on the day of the event Mike was called into work and couldn’t play and thus opened up a spot for John Egeln to play. John in the finals took every advantage he could and beat Dennis Petrillo 6-2.
On Sunday, play started again at 11 AM with some of the best players on the Tri-State tour showing up to play. One notable player, who showed up to play, was the player who finished in third place for the season in the Player of the Year standings in the A+/A class, Scott Simonetti. Scotty who recently suffered a serious life threatening illness and lost his left hand and foot to the disease played one handed and showed us all what true heart and spirit looked like. Scotty played great during his 2 matches and even with the help of another player came up with an idea for attaching a bridge to his arm for better cue stick control. Everyone applauded Scotty and his outstanding effort and positive outlook. The event took a different turn from Saturday though as both players who reached the final match of their Class lost to the player coming from the one loss side. In the A+/A class Chris Taormina beat Daniel Cintron 7-5 to advance to the finals. Daniel moved to the one loss side only to gather his many talents and beat Stewart Warnock 7-3 and then in his rematch also beat Chris Taormina 7-3 to win the A+/A class. In what appeared to be a carbon copy of the A+/A class, D+/D class player Mike Poisler lost to Yomaylin Feliz 6-3 in the hot seat match. On the one loss side Mike regrouped and beat Pete Gallo 6-3 and then went on to continue his winning ways and beat Yomaylin Feliz 6-3. These losses were hard for both players as the finals of each event were single matches to earn the right to advance.
This left the top players in each class to meet in the playoffs. Mike Gasper continued his dominance and once again and crushed his next 2 opponents, Jacob Scwartz and Daniel Cintron both with a score of 7-2, giving him the honor of competing for the overall champion. T.J Smithers played well against John Egeln and beat him 6-4. But in his next match T.J. couldn’t seem to get anything to go his way. He hit a great bank combo only to leave the 9-Ball hanging on the lip of the pocket. Mike Poisler took advantage of all the rolls going his way and beat T.J. 7-1. In the finals Mike saw all those great rolls disappear as Mike Gasper tore through the 4 -game handicap in no time to bring the match to 4-4 quickly. In the next 8 games Mike Poisler tried as best as he could to find opportunities to win games but in the end Mike Gasper’s continued excellent play overcame all obstacles and Mike Gasper won the match 9-7 and crowned himself the 2008-2009 Invitational Grand Champion.