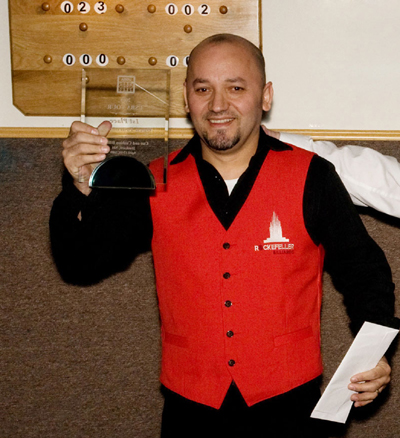 Tournament highlights: Sonny Cho scores 25 points in 9 innings for the tournament best game. Bob Page upsets Michael Kang 25-14 in 23 innings. Electronic scoreboards were used which the spectators absolutely loved. They were able to keep track of the score as well as the innings and a 1 minute time clock per shot was used with 2 extensions per game. This kept the games moving along. Players who were not playing at the time were placed in the schedule to run the scoreboards.

Going into the final match, both Hugo Patino and Mazin Shooni both had records of 8-1. The winner would determine the tournament champion. Jim Shovak refereed the final match. Mazin took a 10-5 lead, looking strong, but Hugo started scoring points and leaving tough. With the score at 17-12 in favor of Patino, Hugo showed why he is the current US Champion by running 8 points and out to win handily, 25-12 in just 14 innings. The crowd cheered and applauded approvingly at Hugo’s feat.

The 2nd through 4th place finishers all had records of 8-2 and were determined by total points scored. Sonny Cho came in 2nd, Mazin Shooni came in 3rd and Michael Kang finished 4th. Juan Elizalde edged into 5th place by defeating Jim Shovak 25-22. Bob Page actually had a chance for 4th place after upsetting Michael Kang but lost to Shovak 25-9 and Collibee 25-7, pushing him to 6th place. 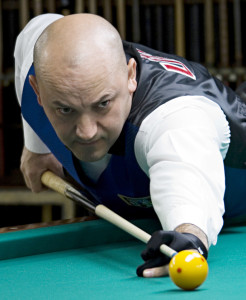 For more photos of the players and event, click the following link
for photographer Steve Booth’s website:

-Room owner Mazin Shooni for adding money to the prize fund and generously providing a celebratory banquet for everyone on Sunday.

-Photographer Steve Booth for generously taking pictures of the event.

-Tony Ferrara, Daniel Sousa and Drew Dangelmayer for making sure that the tables and the balls were always clean and ready to go.

-Tony Ferrara for volunteering many times to run the scoreboard.