Kissing the cueball back off a ball frozen to a rail is another idea that seldom occurs to beginning three-cushion players. Kiss-back opportunities may not arise for hundreds of points: then several may crop up in a single game. The pattern is common enough that every student should devote some time to learning the angles, English, and speed required.

The commonest application of the theme is given in Diagram 97. The main thing to remember in shots of this type is to hit the cueball below center-draw contributes to cueball speed on the rebound and holds the cueball’s path straight. Follow slows the cueball and bends its path.
In the diagram, note that low right English is applied so that the cueball will contact the three required tails with running English. (English that makes the cueball speed up on hitting a rail is called running. The opposite is holdup or reverse.)
If the red ball were at point a in the diagram, it would be best to kiss back to point c and finally to the fourth rail at point b. The reason is that the fuller the hit on the frozen ball the easier it is to judge the rebound angle. A four-rail shot kissing back to c is easier, therefore, than the three rail shot kissing back to d. 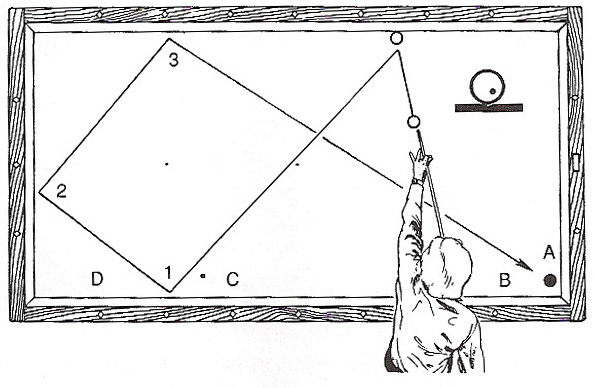