By Eric “The Preacher” Yow!

This issue I want to show three easy set-up shots that will surely impress the passer-by. In my shows of “Eric Yow’s Trick Shot Madness” I perform a variety of shots, some easy, many hard, and everything in between. To get the show started, I often have a few shots setup, ready to go, which are almost sure makes just by virtue of them being set up properly. As illustrated, these are three of the shots, each requiring three balls, which are nice novelty shots to both warm up a crowd and arouse interest in what else you may have up your sleeve.

Shot one: Here I have three balls placed frozen to one another at the first diamond near the corner pocket. You want to place the first ball on the rail and tap it in. To place the second ball, I lay my stick to the right side and aim such that they are pointed towards the opposite rail at the second diamond. This gives you the “angle of incidence equals angle of rebound” which I preach to students over and over. The third ball is placed in line with the second, though this time lined up short of the opposite pocket point, to allow for throw. Shoot from the long string at the third diamond aiming simply to make the first ball with inside English. If you can cut the first ball up the rail to the corner, the other two are automatic. Adjust your speed if the third ball throws too much.

Shot two: The second is comparable to the first with the exception of the fact that now you make all three balls in the same pocket. As illustrated, now you place the first ball at the second diamond. Tap it in for consistency, as with all the balls. The second ball is placed just as in the first description, aimed one diamond out on the opposite rail. The third ball is tricky and its placement depends on the nature of the table you’re playing on. I find that throw and slide are factors that can only be gauged on the individual table. But, a starting point would be to aim the third ball in line with the second ball at the 1.5 diamond on the opposite rail. From table center, aim to cut the first ball up the rail. Adjust your speed or the third ball’s position to make the bank work.

Shot three: Here is the three-ball cluster that makes for another easy shot. From this, you can add more balls to create a number of other well-known shots like “Just Showin’ Off” or “Yow’s Ten-in-One.” Line balls one at two up at the side pocket along the fifty-yard line. The third ball should be aimed at the far corner but short of its center to account for throw. Strike the center ball with medium power and you’ve got another three-in-one. With these three shots you have just become a triple threat to all those who see you showing your skills. 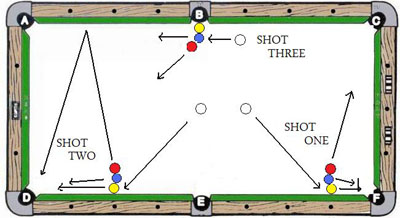