Super Bowl at The Rack

They came from all over to play in this great event that has been going on for 25 years right here in Memphis, TN. New owner Jerry Ramey, and tournament director Mark Dionne were very pleased when a full field of 128 players showed up on Friday. 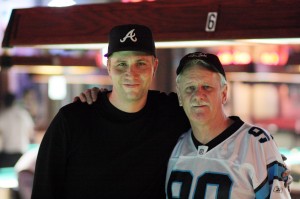 The tournament got underway on Friday night right after the Calcutta and continued into the late hours on Sunday morning. Entry fee was $25, Race to 7, Ladies get 2 games, played on 9 foot Diamond tables.

The semi finals match was slow and dragging until rack 11, where Adam Wilson from Muscle Shoals, AL heated up the table with a strong run out, following a scratch on the break by Jerry Slivka from Pittsburgh, PA bringing the match to 6-5, Slivka leading. Wilson with a dry break in rack 12, left a clear contact to the one ball, but seeing a tough run out, Slivka plays a strong safe, leaving a table length kick from the short rail that Wilson couldn’t get out of. With ball in hand Slivka anticipates a slim one-nine combination and gets it, bringing the match to 7-5 for the win.

In the finals it was Justin Sanders from Jackson, Tn wins the toss and sinks 2 balls on the break but pins the cue ball behind the eight, with no easy shot on the one ball. Sanders jumps over the eight ball, contacting the one, nearly scoring in the corner pocket. Slivka returns for a strong run on the first rack, but struggled a bit on the second, giving Sanders a few swings back at the table, only to turn it back over for Slivka to win rack two and run rack three perfectly.

Sanders seemed to be coming back after winning rack 5 but found his seat again when he jumped the cue ball off the table on the break for rack 7, bringing Slivka back for yet another great out, bringing the score to 5-2, Slivka leading.

Slivka took rack 6 quickly with the 9 on the snap, but the luck didn’t carry as the cue ball found a pocket on rack 7, bringing Sanders back for a decent run, until he missed a tough table length shot to cut the 6 ball to the corner pocket. When it was all over it was Jerry Slivka taking home the Super Bowl 2009 bragging rights and $1,5000 in cash.
Payouts paid out 16 places and with the Calcutta paid out over $11,000. If you ever passing Memphis stop in at The Rack, you will like the action 24/7.