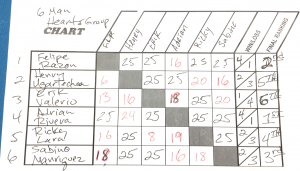 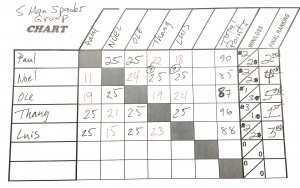 The house had recently added new Royal Pro cloth on all 5 of their Verhoeven billiard tables and added 5 new sets of Aramith Pro Cup balls for the event.
The matches had many memorable moments including two prelim matches where Noel Lara ran a 7 and out against his opponents yet still didn’t advance to the final round. Another prelim match had Felipe Razon beating me, Henry Ugartechea with runs of 8, 6 and 3 runs of 3. 25 points in approximately 12 innings!
The best performance was a high caliber steady game through out by the tournament champ Thang Le who has raised his level of play recently with impressive practice matches that include a run of 14 and a 2.32 avg. in a 30 point game played at nearby 5000 Years Carom Billiards in Morton Grove, IL
Below are the results with a picture of the finalists. The event was a success and ran smoothly with much enjoyment and praise by competitors and fans alike. 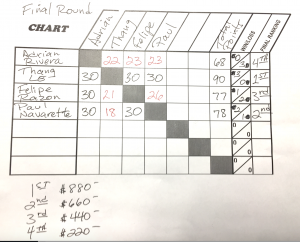