Will update list as new names come on. This will me again one of the exciting matches in 3-Cushion

The Verhoeven Open at Carom CafÃ©

Yes, it’s an expense if you don’t live in New York City – airfare, hotel, food, etc. – but, if you can afford the trip, when you return home you’ll say, “It was worth it – worth every penny.”  Some of us have even said, “It’s the best money I ever spent.”

Why would someone say that?  Let me count the ways”¦

OK, OK, I understand that many of you who are reading this column have zero interest in going to New York City. Too crowded. Too expensive. Too much crime. Yeah, it’s crowded. Yeah, it’s pretty expensive. (Of course, if you really cannot afford the trip to New York, that’s a legitimate reason for not attending – and you can instead watch Kozoom.com’s streaming of the event.) However, if concern about crime in New York City is what’s holding you back, you need to know that New York City has been the safest of the 30 largest cities in the U.S. for some time. (Don’t believe me? Check this out: https://www.brennancenter.org/analysis/nyc-can-still-boast-being-safest-big-city)

Still not convinced? You’d rather stay home where you’re comfortable. You’d rather be a couch potato and watch 3-C videos. I get it, I get it”¦ but I’m not giving up: I want to urge you to consider getting out of your comfort zone so that you can experience something special, very special.

In order to get you to at least consider attending the Verhoeven Open, I need to ask you:

Well, if you answer “yes” to any of these questions (and especially if you answer “yes” to more than one of these questions), I’m 99% certain that, if you attend the Verhoeven Open, it will be a mind-boggling event for you – one that you’ll be talking about all year”¦ and likely for the rest of your life. If you can’t make it to the entire tournament due to time or money constraints, you can always come for the final three days (Aug. 4-6) to witness the crescendo of excitement as the tournament moves toward the climax of crowning a champion. (And don’t forget that New York City is a lot closer for most of you than countries overseas.)

Full disclosure: I have zero financial or commercial or legal interest in or association with the Verhoeven Open. I just want you to have the time of your life (without getting into trouble ;-).

I’ve gone to a bunch of these tournaments over the years, traveling from the West Coast. Every year it’s been a highlight in my life. (Yes, I’ll be going again this August – because it’s irresistible.)

If you can go, don’t wait: make your reservations now! And if you can’t go, be sure to watch the matches on Kozoom.com.

And here, again, are links to all the details about the tournament:

<P.S. Thanks go to Bert van Manen, Charles Brown, and David Levine for providing information making editorial suggestions, and correcting mistakes in the draft I sent them. I take credit for any remaining mistakes.> 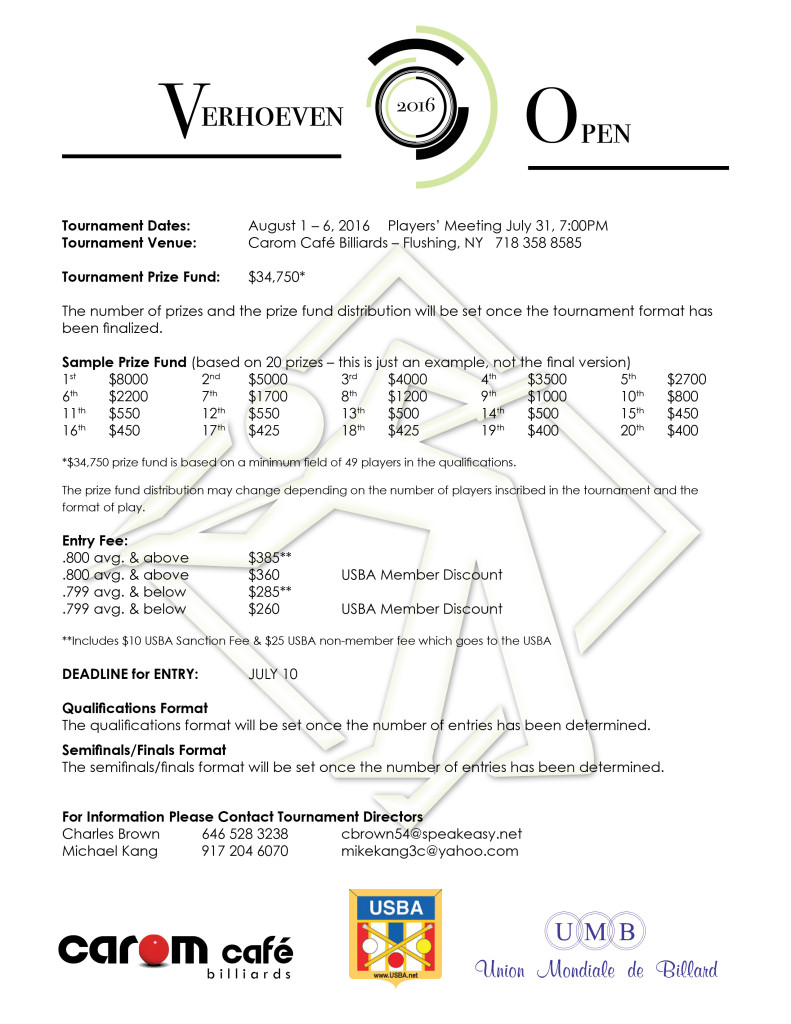