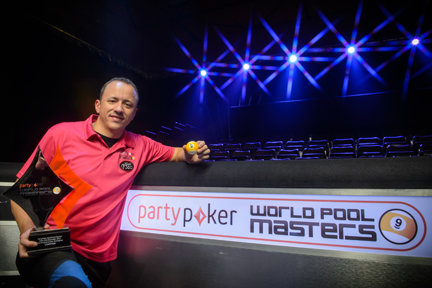 ‘WANT PAIN? PLAY SHANE’ say the tee shirts and so it proved as Shane Van Boening torched his way through the field to become only the second American player to win the PartyPoker World Pool Masters as he looked in total control to beat Nick Ekonomopoulos 8-2 at the Portland Centre, Nottingham.

Van Boening’s victory silenced any doubters who felt he couldn’t do the business outside of the USA and sent out a warning shot ahead of the Mosconi Cup which gets underway in two weeks time.

Wins over Australia’s James Georgiadis and then England’s Mark Gray took him through to the semis where he disposed of Chris Melling to set up the championship showdown.

“It is an honour to win the World Pool Masters, this is one of the greatest days in my career,” said an emotional Van Boening after he took a standing ovation from the crowd.

“It means a lot to me to win this tournament. I have been playing well over the last six months. Whenever I had a shot I took it down, I only made a couple of mistakes in the last couple of matches.

“I know Nikos, I think I might be in his head a little bit because I have been playing him all year and he hasn’t beaten me yet.

“I have been trying to win overseas and I have got to the finals of a couple of tournaments, and won the World Cup of Pool in 2008. It has been a battle for the last few years so I am really happy to win today.

“I was playing well at the US Open a few weeks ago, so I visualised myself winning the US Open because positive energy makes a big difference.”

Van Boening won the lag, made a ball into the centre pocket and carefully worked his way through the table for the opening rack. It looked like more of the same in the next but the American scratched into the middle pocket as he pocketed the 8 ball down the rail to gift the rack to Ekonomopoulos.

A dry break though, got Van Boening back to the table and he cleared to regain the lead and then ran out the next one for a 3-1 lead. Three balls on the break plus a clear shot on the 2 ball was the result of the next break but Van Boening lost position and Ekonomopoulos lays a snooker that his opponent can’t escape from and with ball in hand the score goes to 2-3.

It soon became 4-2 after the Greek missed on the 1 ball but Van Boening came up with his second golden break of the tournament to put some distance between him and his opponent. They both had visits in the next before Van Boening’s superior shot-making at the close won him the rack for a 6-2 lead. He took the next for 7-2 and then fittingly ran the table out from another superb break shot to seal the glory.

Earlier in the semi-finals Van Boening had defeated Chris Melling after he got off to his usual fast start. In the earlier match, Ekonomopoulos looked all business as he went past Poland’s Karol Skowerski.

The event will be produced by Matchroom Sport Television who will be making 15 x 1 hour programmes of the tournament for international syndication.