FISHER RISES FROM THE DEPTHS

(Guilin, China)–Kelly Fisher has been around professional pool long enough to know that sometimes in this sport, as in life, you have to go through hell to get to heaven. 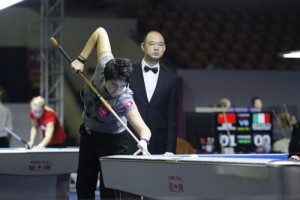 Hell in this case for the 2012 World 9-ball Champion was losing her first round match on day 1 today at the Women’s World 9-ball Championship against hall of famer and pool’s most recognized personality, Jeanette Lee, 7-4. The Brit, who three months ago had open heart surgery to repair a congenital defect, had trouble with the lightning quick speed of the table. The match was even halfway, but Fisher gave away too many shots and the Black Widow waltzed. In the double elimination group stages, Fisher knew her back was suddenly against the wall.

“Now it’s cutthroat time,” she said while waiting for her next match which could see her go an embarrassing two-and-out. “There’s no second chances.” 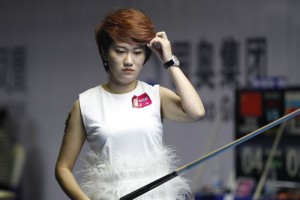 If having to tangle with the likes of Lee wasn’t enough, Fisher then had to step into the ring in a do or die match with none other than Austria’s Jasmin Ouschan, who had just lost a cliff hanger to Japan’s Chichiro Kawahara, 7-6. If you’re getting the idea that this is the proverbial “Group of Death,” you’re absolutely correct. All four of these players are capable of taking the world title.

With one of pool’s stars on the verge of taking a rapid road out of town, Fisher and Ouschan put on a splendid show. Ouschan stood in front of clear table down 6-5 but incredibly missed an easy 3-ball to hand Fisher the match, 7-5.

“Absolutely I’m relieved,” said the clearly delighted Brit afterward. ” I’m  not out of the woods yet but I’m really happy to have won that match. I would’ve really really hated to go two and out, especially in my first world event back. It was a flip of the coin between me and Jasmin. I certainly got the rolls on the break, as I was on a shot every time and she wasn’t.  It was very close. Every time I missed she punished me. Every time she missed, I punished her. It was a great match because so much was riding on it, so I expected a scrappy match.”

With a chance to move through to the final 32 single elimination knockout on Thursday, Fisher knew she had, for the moment , pulled the narrow escape. She was hoping the scare today would lead to something positive as, more often than not in pool, champions have had to go through death defying cliff hangers along the way before they move on to win.

Said Fisher: “When champions have won an event, it’s often through a tough route, something funky has happened.  Fingers crossed that that is my destiny. But I have to take it just one match at a time. ”

Day 1 at the 2014 WPA Women’s World 9-ball Championship opened up just after lunch at the Guilin Gym in this beautiful city with all 64 players seeing action. The field is as good as this event has ever seen in its 23 editions as all 25 of the WPA’s top 25 women are here.  Combine this with the short races, and unpredictable table conditions and it was clear that anything could happen.

Taiwan brought its usual high powered contingent across the Strait and, based on today’s results, you can almost guarantee at least one Taiwanese player will appear in Saturday’s semi-finals. Chou Chieh Yu, Tsai Pei Chen and Tan Ho Yun all won their first rounds matches. The biggest surprise for Taiwan was the quick exit of last year’s runner up Lin Yuan-Chun, who lost two straight.

Hall of Famers Karen Corr and Allison Fisher won easily, as did the Philippines Rubilen Amit. The Philippines Iris Ranola was sent home after losing two straight. But the Philippines still has two players left with the addition of 15 year old Chezka Centeno. Centeno came to Guilin with her mom and dad and entered one of the qualifiers, which she won. She lost her first match today, but rebounded with a solid 7-4 over Poland’s Katarzyna Wesolowska, to get one more chance on Thursday. 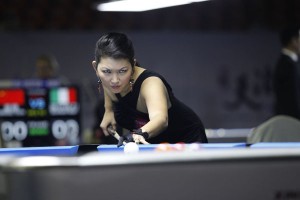 Korea’s Yu Ram Cha, who is treated like a movie star in China and is followed by camera toting fans everywhere she goes, got taken to school by Corr but easily won her losers side match to survive. Fellow Korean Ga Young Kim, one of the favorites to take the title here this week, also won.

In all, 12 players have already been handed their pink slips. By the end of Thursday’s play, the field will be down to the final 32, who will then play single elimination knockout, race to 9, alternate break. The semi-finals and final will be played Saturday.

With so many great women players from all over the globe doing battle on the cloth pitch, there is bound to be plenty of heartbreak, tension and  near misses to come. Nobody ever waltzes to the winners circle in pool. In fact, a trip to hell is par for the course in this sport.  After her first round win over Fisher today, Jeanette Lee called it perfectly, noting that pressure and tension is something all players, including the eventual champion, have to take to heart.

“There’s a lot of first round jitters,” Lee said. “It’s the same for everyone I know. You always hope to have an easy match your first round. But I never want to win a tournament without having to play all the best.  I don’t want to win a tournament because I got a good draw.  I want to have to battle beast after beast. I want to play them all, maybe just not in the first round, maybe in the second round.  Once you know that your back is against the wall, this is the way it is, you better learn to like it.”

*The 2014 Women’s World 9-ball will be held in Guilin, China from October 13-18, and is sanctioned by the World Pool & Billiard Association(WPA), the world governing body of pool.  64 women players from across the globe will compete for the biggest prize in Women’s Pool.

LOSERS BRACKETS
Winners get one more chance, the loser is out