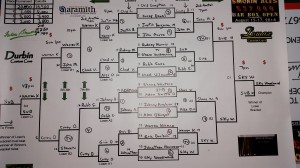 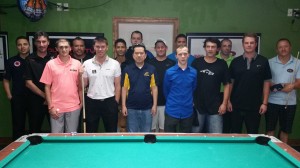 For the second time in a row a young upstart player walked away with the 20k top prize from the Smoking Ace’s Bar Box Open. Last time it was Justin Bergman, this year it was 21 year old Sky Woodward who went through this star studded field undefeated.

Woodward might be young but he is definitely not an unknown. For American fans he has been been known for a few years already. For the rest of the world this year has been his coming out party, winning the banks ring game at Derby City. In the last month he has followed that up winning the Grand Masters event at the BCAPL and now this event.

Bar Box tournaments are the fad as of late because they are known as the great equalizer. Smaller tables and big pockets means missing for these guys is a rare occurrence. This game is all about offence so when experienced players like Rodney Morris, Johnny Archer and Corey Duel do not have the strategical advantage that they would usually have on a 9 footer. In fact in this tournament where Morris and Archer were some of the biggest names, they only won 1 set between the two of them.

Yesterday there were only 4 remaining and the day started off with the A side final match between SVB and Woodward. The already seasoned, well beyond his years Woodward never looked the least bit intimidated going up against the number one American. This set was close with Woodward winning 21-18; the only real difference here was that SVB kicked the cue ball in for a scratch a few times off his break. It was the only edge that Woodward needed to dispatch SVB to the losers side final.

There he met up with Warren Kiamco who had been on fire after losing a match early in the tournament. He also survived a few sets in which his opponents had 6 game leads and more. Kiamco had just beat Corey Duel 21-5 in the other final four match, which saw Kiamco put together multiple packages, his highest being six racks in a row.  The B side final was a closer affair as this set went 12-12 then 16-16, until SVB pulled away at the end to win and get another chance at Woodward.

This tournament was set up in a true double elimination format. This meant Van Boening had to win two races to 21 to claim the title. From the beginning SVB looked like he was determined to turn this final into a marathon, claiming an early lead. Woodward was losing the entire time however at 16-12 down, SVB had a break get away from him and it opened the door for Woodward who took full advantage. In a blink it was tied, then Woodward continued on breaking and running the final rack to win again 21-18 to close out a fantastic tournament. I would like to thank Ray Hansen for the great stream and making coverage of this event possible.