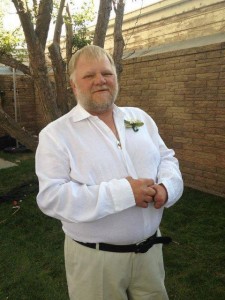 September 30, 2013 (Englewood, CO): Steve “Nubbins” Doehling was an avid pool enthusiast who passed away at the early age of 52 last spring. He served the director for The Platte Valley VNEA Pool League and was a major volunteer each year with the Annual Wyoming Open. He also participated in the High Desert Shootout and the Wyoming State Pool Tournament.

“Nubbins” was known for his generosity, kindness, and his shining smile which is why it was no surprise when he suggested getting the youth involved with the High Desert Shootout in Rawlins. He loved the kids and wanted to get them as involved in pool as much as he could. After his passing, a benefit tournament was held and a portion of the money raised was put away to promote youth pool.

E.J. Glode, known for the popular Wyoming Open and the High Desert Shootout Tournaments in Wyoming, reached out to Str8 Shots, who agreed to match the $500.00 contributed by the “Nubbins” Memorial Fund. They worked in conjunction with the Billiard Education Foundation (BEF) to bring the inaugural “Nubbins” Memorial Junior Event.

18 youth arrived at the Jeffrey Memorial Community Center to participate in three youth divisions: 18 and under, 14 and under boys, and 14 and under girls.

Philip Canaday, the owner of Wreck-A-Mend Collision Center, donated a cue and a case to be awarded to the youth who displayed the best sportsmanship throughout the event. Str8 Shots added a leather cue holder so that all 3 divisions would have a sportsman award.

Str8 Shots owners, Marc and Kimberly Griffiths graciously donated their weekend to direct the tournaments and raise funds for the BEF. The organization also thanks volunteers Tarasa Escoubas, Len Lamaster, and Stephanie Wise for their support. 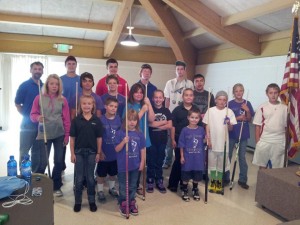 It was a tough field in the 14 and under girls division with Kelly from Saratoga, WY working hard to make it to the finals undefeated. However, Brenna from Denver, CO was not ready to throw in the towel and after being sent to the loser’s bracket by Bailey, worked her way back to the final matchup. Both young ladies were determined with every shot they made. Brenna won the first round and after a short break the girls went back to the table. It was a race to 2 and with a win in both girls column, the thing that impressed the bystanders the most, was the laughter and chumminess the two girls displayed. While Brenna walked away with the 1st place prize, they both walked away with a newfound friendship.

The 14 and under boys division matches were nothing shy of spectacular. The older boys in the division took their time with the younger boys and helped them greatly. They showed them how to line up the shots, helped place their cues on the bridges when the shot was just out of their reach, and cheered for them when they made the shot. It was heartwarming to all who watched. Taylor from Rawlins, WY went through the bracket undefeated and waited for his chance to win the first place prize. He had to wait awhile because Sheign from Kimball, NE, who after losing in the first round to Aaron, fought hard to get back to the finals. Both boys displayed their skill at the table but Tayler was determined to go home with that 1st Place scholarship and he did.

Taren from Denver, CO has been training hard and it showed at this event in the 18 and under division. Earlier this year at the Wyoming Open Juniors Event, Seth from Rawlins, WY took the coveted first place prize so everyone was excited to see how the day’s events would unfold. In the second round, Taren played Waddie and Seth played Cain. Both young men showed their determination by sending their opponents to the loser’s side. However, they matched up in the 3rd round and Taren sent Seth to the loser’s side. Kendall was waiting for Seth and both young men knew the heat was on. Kendall and Seth went back and forth, with Kendall making every shot count. In the end it was Seth who returned to the finals. Seth would have to win twice over Taren to take home 1st place and he knew going into the finals that would be no easy task. The skill both young men displayed was inspiring to all who watched. Taren lost the first round to Seth but the smiles and laughs kept coming. Seth again took first place but I think he knows that Taren is on his heels and he will be ready when they meet up at the Wyoming Open in March.

The sportsmanship awards were given to the following youth. There was a tie in the votes for the 14 and under boys division so Philip Canaday donated another cue so that Tayler C. and Zane  J. could both be recognized for their outstanding sportsmanship. Kelly G. in the 14 and under girls division walked away with a beautiful purple and black cue case for her awesome sportsmanship. Taren S. was recognized in the 18 and under division for his sportsmanship and he received a leather cue holder as well as a cue ball signed by Rodney Morris and Raj Hundal. All four of these youth showed what matters most at the end of the day is honesty, fairness, and support for those around you!

We would like to thank all those who participated in the fundraising efforts. Joel Christensen from Wheatland, CO generously contributed $350. The total $720 raised at the event will help the BEF in their efforts to promoting youth in billiards and encourage them to reach for the stars academically. Len LaMaster won a cue at the event and donated it to the University of Wyoming Billiard Club to aid in their efforts to raise funds and promote the sport.

All in all, it was the perfect way to spend a Sunday afternoon BEF style.  There were great matches, awesome sportsmanship displayed by all, way too many sweets, and lots of laughter. Whether the youth won or lost their matches, they enjoyed themselves. They made new friends, chatted with old friends, and showed everyone how great it is to be a kid.

The BEF would also like to thank E.J. Glode, Andy Cloth, Str8 Shots, Polaris, the Jeffrey Memorial Community Center, the Lions Club, and everyone involved in making this event a huge success. To view all photographs from the event please visit www.billiardeducation.org.

14 and Under Boys Division

14 and Under Girls Division

Andy Cloth was founded in 1973 and has become one of the premier professional playing cloths in the world today. Manufactured in Taiwan, Andy Cloth has quickly impressed critics and professional players worldwide and has been exclusively used in major international events such as The Women’s World 9-Ball Championship, The China Open, The Beijing Open, USA’s 71st World Tournament of 14.1 in the USA, the International 10-Ball Championships in Philippines, the Wyoming Open, the High Desert Shootout and many more. Andy Cloth can be reached to consumers and dealers by contacting andyclothusa@gmail.com or call 1-307-710-1447.

Str8 Shots is an online retailer for billiard and dart supplies. Visit their store at str8-shots.com/store. They have also been hosting a series of successful adult and junior events throughout Colorado and plan to bring even more events, including tournaments and fundraisers in the coming months.