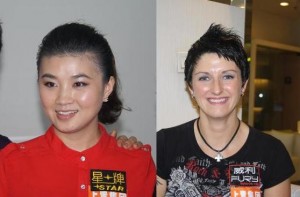 (Shenyang, China)–It’ll be a high quality battle of east vs. west as China’s Fu Xiaofang will meet Great Britain’s Kelly Fisher in the finals of the 2012 Women’s World 9-ball Championship.

The race to 11, alternate break showdown will take place at 7pm local time(GMT + 7).

Earlier in the day at the Richgate Shopping Center in Shenyang here in northeastern China, Fu, the 2010 World 9-ball champion, handily defeated Taiwan’s Tsai Pei Chen 9-6 in the first semi-final.

In the second semi-final  Fisher barely squeaked by 2009 World 9-ball Champion Liu Shasha, 9-8, in a heart pumping match that wasn’t decided until the very last ball.

Fisher had barged into the semis via a 9-0 blowout of Taiwan’s Tan Ho Yun the night before but the circumstances were completely different today for the Brit.  Liu’s safety-first approach to the game made the match a complete slog and Fisher had to fight for every rack.

Things didn’t look to be going well for Fisher early on as she fell behind 2-0, then flubbed a straight-in 9 ball which led to a 3-0 deficit. It was 40 minutes into the match before Fisher finally got a rack on the board and she finally started to battle back, taking advantage  of several mistakes by the Chinese star and tying the match at 4-4.

The pair exchanged racks until Fisher finally grabbed her first lead at 7-6. While Fisher was battling, Liu was looking slightly shaky and indeed a blown 8-9 combo by Liu put Fisher on the hill up by two.  Liu broke and ran to make the score 8-7, then tied it up when Fisher ran out of position and left a safety open.

With the packed crowd on the edge of their seats, the final rack produced more twists and turns than the Great Wall of China. Liu could barely hold the cue and had three chances to clear the table only to miss or leave poor position.  After over hitting the cue ball, Liu had an impossible full table shot on the 7-ball and missed by a mile, leaving Fisher a three ball run out which was anything but simple. As the last 9-ball dropped, Fisher let out a scream of relief and joy as she would now be playing in her first ever final of a World 9-ball Championship.

“OMG!” Fisher said when asked what she thought about what had just happened.  “When the 9-ball went in, that was an amazing feeling.  It was a very tough match. I never felt like I was in control. I was calm but I couldn’t get anything off the break. I was always pushing out. And she(Liu) plays a lot of safeties. But I was patient.”

Fisher now has a chance to become the first woman to ever hold the World 9 ball and World 10 Championships simultaneously.  But she’ll have to face one of the best in the business in the 24 year old Fu. Fu has been one of the top players in the world over the last two years and she usually plays steady and rock solid pool. She’ll also have the backing on tens of millions of Chinese pool fans who will be watching live on television around the country.

Fisher, though, has also been one of the top touring pros on the woman’s circuit for the last few years and has carried the air of a winner over the last week here in Shenyang.  And after emerging victorious in the knockdown drag out brawl of a semi-final, the 34 year old from Yorkshire plans on  having fun in the finals.

The WPA will be providing full coverage of the  finals from the 2012 Women’s World 9-ball Championship in Shenyang on our website, www.wpapool.com. There you can get all the latest updates with live scoring of all matches, articles offering insights and analysis, updated brackets and photos. Fans around the world can also follow the tournament via the WPA Twitter feed, @poolwpa.