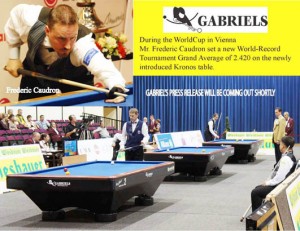 Two old rivals met in the early rounds of the Champion of Champions tournament.  Mazin Shooni and Sonny Cho traded billiards for the better part of the game, but Mazin gradually pulled away with some great shot making.  He made a double-the-rail shot for his 33rd billiard, and an umbrella for his 34th.  One more would give Mazin the victory.  A routine three-railer would seal the win.  He struck the cue ball, which touched ball number two and then the long rail.  It seemed right on course as it hit the second rail.  Sonny rose from his seat to congratulate his foe, but the cue skidded long off the third rail and slid by ball number three.  “It missed by next to nothing,” Mazin would later say. Trailing 28 to 34, Sonny stepped to the table.  Watch the fabulous end.