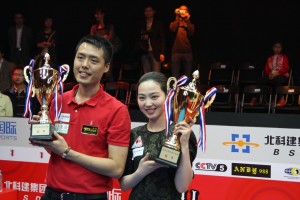 Jun Lin Chang and Yu Ram Cha are the 2011 Champions of the Beijing Open.  Chang, a former winner on the Guinness Tour, proved his mettle this week by taking on a series of tough opponents and vanquishing them all.  He first eliminated Carlo Dalmatin of Croatia who had earned his pedigree by bettering Thomas Engert (9-6) and Charlie Williams (9-2) Just to get into the Championship draw sheet.

His next opponent had promise of being a very tough match. Feng-Ban Zhao had just come from a solid 11-4 trouncing of newly crowned Philippine Open champ Thorsten Hohmann but Chang was simply an over-reach for Zhao as Chang mangled him 11-5  to earn the right to do battle with Nick Van Den Berg.

Van Den Berg had done some giant-killing of his own.  He had beaten both Shane Van Boening (9-3) and Dennis Orcullo (9-4) in the primary rounds and continued to grind it out through the final brackets. He took down Hao-Xiang Han (11-8) and Quingshun Yang (11-8) before destroying former World Champion Ronnie Alcano  11-5 to find his way into the ring against Chang.  This one was a great match that could have gone either way but when Chang prevailed 11-9 he was only one victory away from the Championship. 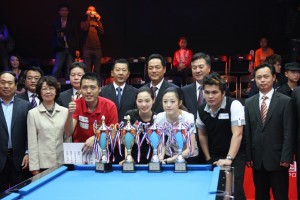 He would have to get past Superman to get to the brass ring. Roberto Gomez had finished 2nd four years ago at the World 9-Ball Championship and he was determined not to play the bridesmaid again. Gomez’s first challenge was 2008 Challenge of Champions and 2010 World Cup of Pool winner Jian-Bo Fu.  It was not the closest of matches but the 11-7 win was tight enough to temper the sword.  Gomez then had to take on friend and countryman Antonio Lining. Lining had just eliminated current World 9-Ball and new Hall of Fame inductee Francisco Bustamante 11-7 but even he could not hold up under the withering fire of Gomez. Gomez advanced 11-5.

Gomez then polished off Chia-Ching Wu (now renamed Jia-Ging Wu) 11-9 and Che-Wei Fu 11-9 even after Fu had just ruined all of the Magicians tricks as he overwhelmed Efren Reyes 11-3.

The Championship was a great fight. They don’t get closer than double-hill and both men showed their best promise as they kept the crowd enthralled throughout. In the end the last-rack decider went to Jun-Lin Chang and our new champion presented himself to the crowd owning the 11-10 win over Gomez. 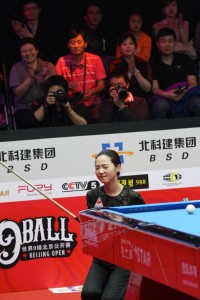 The ladies’ division was captured by 2010 Amway Cup Champion Yu Ram Cha.  Cha really had her work set out for her this week. Her first opponent in the final bracket was Miyuke Fuke of Japan. Fuke, former runner-up in the Japan Open, just couldn’t hang with Cha and fell 9-4 before her onslaught.  Then Cha had one of the toughest opponents ever to grace a stage. She had to take on Kelly Fisher. This was one for the ages but even Fisher was forced to bow 9-8 to the never-say-die cueing of Yu Ram Cha.

Shu-Han Chang is a perennial top-five finisher who is due more championships. The former Japan Open Champion could not get anything going against Cha and Cha eased into the Championships against Chieh-Yu Chou. Chou is another Japan Open Champion. She won in 2010.  She also won the 2009 Amway Cup and had finished second at the Japan Open in two other years.  She’s a tough nut to crack. But Cha was well armed and ready. She shot Chou down 9-6 to earn her place atop the podium.

Full brackets and scores of all matches for both divisions may be found at: http://www.wpa-pool.com/web/index.asp?id=131&pagetype=live_scoring&eventid=24