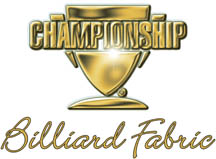 LINCOLNWOOD, IL – Proving that there are positive signs in what has been a trying time for the billiard industry, Championship LLC announced expansion plans both in its product offerings and its physical footprint.

“This was a great opportunity to make Championship the ‘Complete Table Top Experts’,” said Cohen, “and to move into a larger space that will allow us to offer a complete showroom and training facility for installers.

“The move to Elk Grove Village was an easy choice,” added Cohen. “It is the transportation hub of the Midwest. This will allow for later pick-ups and better shipping channels for our customers.”

Construction on Championship’s new headquarters has already begun, and Cohen is planning for a May move.

“What a great team of industry know-how to be a part of,” said MBS Group’s Mike Serra, who will now be vice president of Championship. “We’ll have all the necessary tools to supply the industry top-level billiard products. I’m excited to think about the future and what it holds for our MBS and Championship customers.”