The Pearl Strings Together A Victory

The Pearl Strings Together A Victory
By: Gerry Mayen 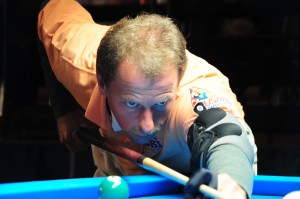 The stage was set up perfectly inside of Hard Rock Live, as the finals table shined bright for all of the television cameras to capture the epic match up. Fans lined up outside of the venue waiting for the gates to open for a chance to see this spectacular match.

Strickland would win the lag and break first. Strickland was unable to run the rack and Putnam was able to jump to an early 1-0 lead. Putnam would continue to apply the heat and go up 2-0. Strickland would cut the lead to 2-1 off of a few costly misses by Putnam. They would both exchange racks, but Strickland finally caught up and tied the score at 4 then tied again at 5. Putnam would win the next rack to go up 6-5 and from there it would be the Earl Strickland show. Strickland would tie the match at 6 and then go on to win the next two racks. One the 14th rack with the score 8-6, Strickland sank the 10-ball to go up 9-6 and he threw both hands in the air and yelled, Finally, I did it as He went to shake Putnams hand and congratulate him on a great match only to have Putnam inform him that it was a race to 11 and not 9. Strickland would not let the embarrassing moment shake his psyche. He would win the next two racks and officially win the 2010 Steve Mizerak Championship.
All of the excitement of this final match will be aired nationally on Fox Sports nationally in stunning high definition on the weekend of December 11th and the week of December 13th. Please check your local listing for times and dates.
The Seminole Pro Tour would like to thank all of the fans and players who supported the tour this year. We would also like to thank the sponsors for the Steve Mizerak Championship: the Seminole Tribe of Florida, Seminole Media Productions, Seminole Hard Rock Hotel & Casino, Hard Rock Live, Diamond Billiards, Delta 13, and the Predator Group. The 2011 Seminole Pro Tour schedule will be announced very soon.
Final Payouts
Place  Player  Prize Money
1 Earl Strickland $20,000
2   Shawn Putnam  $11,000
3  Darren Appleton $8,000
4   Mike Immonen  $5,000
5  Thorsten Hohmann $4,000
6  Corey Deuel $4,000