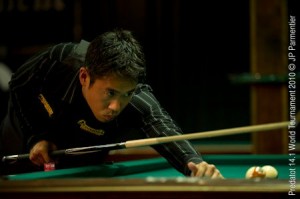 Williams ran a 96 against Tom Karabotsos in his first match and then had to play back to back against Ortmann. The German was a heavy favorite, but Williams rising straight pool game had been one to keep an eye on. Ortmann led 110 to 14 in the race to 150. Williams then came with a better run than in his first match, a 118 high of the tournament thus far. He then played safe, Ortmann missed, and Williams cleared the rack plus a few more to get the win.

“I didn’t really expect to win to be honest. When he was up by a hundred balls, I just told myself don’t embarass yourself , go make a decent run”, said Williams. Don’t be fooled, Williams earlier this year won the Derby City Classic 14.1 and the Super Billiards Expo 14.1 events and has now added Ortmann’s name to the list of straight pool legends he has taken down such as Mike Sigel, John Schmidt, Jasmin Ouschan, and Ralph Eckert. Williams is done for the day and has made it to the final 16 at The World Tournament again for the fourth time. He placed a career 5th last year.

Another dark horse Dan Heidrich is making some noise. From Rochester, New York (the same city as famed Mike Sigel) , Heidrich overcame Israel’s Zion Zvi and then upset top seeded Li Lo Wen of Taiwan. Heidrich has played in two previous World Tournaments and this will be his first time in the final 16 races to 200 points.

“I’m so happy right now that I feel like I can pick up this whole poolroom on my shoulders!”, said Heidrich after the match.

Live scoring and brackets will be hosted by www.azbilliards.com and live streaming of the event at www.accu-stats.com
Additional coverage at www.DragonPromotions.com Info contact worldstraightpoolchampionships@gmail.com