2009 USSA National Snooker TourStop #6
Mike Monegato Captures
On Cue Handicap Snooker Classic
____________________________________
The United States Snooker Association (USSA) continues to rejuvenate snooker in the United States in 2009 with its inaugural USSA National Snooker Tour, and the sixth and final stop on the Tour – the On Cue Handicap Snooker Classic at On Cue Billiards, directed by USSA board member Tom Kollins – in Grayslake, IL, April 24-26, again enjoyed a full 16-player field. Four round-robin preliminary flights determined the eight players for the final rounds. The preliminary flights featured 2-frame matches among each opponent within a flight for a total of six frames played per player. Due to the handicap format, the six top players – Tom Kalinowski III, Marek Kuc, Chuck Looney, John Connelly, Chris Szarek and Mike Monegato – gave starts to the rest of the field, with 11-year old JonMichael Monegato (St. Charles, IL) receiving a 35-start-per-frame against the top players in the preliminaries and winning two frames!. No player went undefeated in the preliminaries, and only John Connelly built a comfortable 5-1 record in “Group B” to move on to the single-elimination knockout stage. Kyle Benn (Group B), Tom Kalinowski III (Group A), Paul Clay (Group C) and Lee Rathert (Group D) all joined Connelly in the next stage, but Marec Kuk, Aidi Zainal and Mike Monegato – each with 3-3 records – scraped through to join their compatriots in the knockout stage by outpointing their tied competitor in heads-up play [Zainal] and the high break category [Kuc (27), Monegato (20)].

The top two in each flight moved forward to the single-elimination quarterfinals. Tom Kalinowski III is the son of the tournament director and Stop #2 champion, Tom Kollins, and he faced off in the knockout stage with Aidi Zainal, who learned to play snooker in Malaysia and currently resides in Milwaukee, WI. Zainal clipped Kalinowski 2-1 to advance to the semi-finals, where he was joined by Mike Monegato (who edged Marec Kuc 2-1), John Connelly (who whitewashed Kyle Benn 2-0) and Lee Rathert (who dominated Paul Clay 2-0). In the semi-finals, Monegato – playing even – dominated John Connelly 2-0 to earn a spot in the title match. His opponent proved to be Aidi Zainal, who beat Lee Rathert on even terms by a 2-1 margin in the semis. In the final race-to-3 finals, Zainal could not take advantage of his 20 start from Mike Monegato in each frame, and Monegato comfortably claimed the crown, 3-1.

Further kudos are extended to Tom Kollins (tournament director) and Chris Szarek for displaying top-level officiating skills throughout the semi-finals and finals of the event! 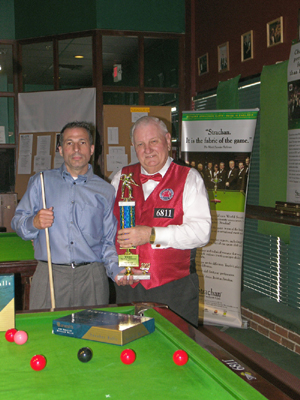 The USAA National Snooker Tour is sanctioned and produced by the United States Snooker Association (USSA) [established in 1991], which is recognized as the USA governing body for snooker by the world-governing body – the International Billiard & Snooker Federation (IBSF) – and which produces the annual USA National Snooker Championships to determine the representatives from the USA to the annual IBSF World Snooker Championships. The 2009 USSA National Championships will be conducted at the Prince Snooker Club in New York City, NY, May 21-24, and is open to the first 32 entries who are permanent residents or citizens of the USA. Info and entry details are available on the USSA website – www.snookerusa.com.

The USSA National Snooker Tour is proud to have been sponsored by Aramith Billiard Balls and Strachan West Of England snooker cloth. The first national snooker tour in USA’s cue sports history was a decided success, as every stop attracted a full field playing on the best snooker equipment available within the United States. The USSA is looking forward to building on this success in planning the 2nd Annual USSA National Snooker Tour over the next year! If you know of a billiard room with at least two (2) 6 x 12 snooker tables that would be interested in hosting a stop on the next tour, please contact the USSA at ussa@snookerusa.com.