“Great time as well as informative. Each instructor was attentive and eager to pass on information. Can’t wait till the next class!” , said Hector Quinones, a local Chicago player who attended the class.

“Our main business is to produce televise billiard events, but doing these pool schools is a great way for fans to really get to know the top players first hand. The pros really seem to enjoy the interaction with the students and we’ve seen many friendships form that have lasted years now. Players such as Rodney Morris and Thorsten Hohmann still stay in touch with many of their students. And it’s just fun!”, explained Cindy Lee, CEO of Dragon Promotions.

The school lasted for two days with each student spending two and a half hours with each instructor per day. Then the students enjoyed a personalized lunch with their pro masters both days socializing and getting a dose of funny stories from the pro tour. The event concluded with a finale student tournament and prizes for all the students. All in all the students spent nearly a total of 20 hours with the pros, with 75% of the time on personal instruction. 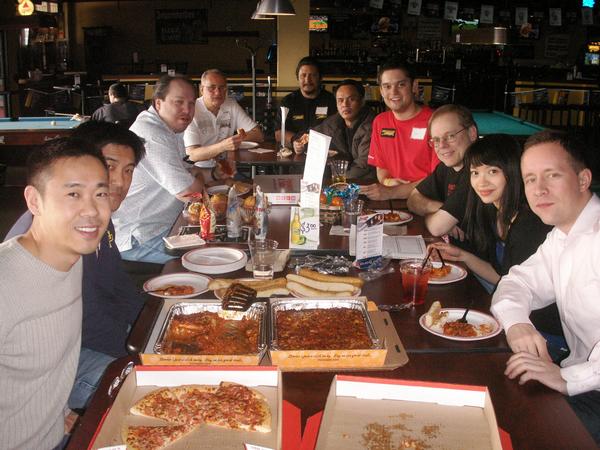 Pros and students sit to enjoy a meal together

“Anyone who attends this school will improve their game,” said Gary Katz, a retired trial attorney.

The traditional Predator Pro Pool School Student Tournament was held at the conclusion of the classes and all the students were enrolled to play to take a free shot at a new Predator Cue. The students were ranked from lower level to higher level in C, B, and A Class to play in the handicapped event . Zarah Delrosario, the only female student and ranked C, went undefeated with the toughest draw defeating three A Class players in a row to win her first tournament ever. In the finals, Delrosario fresh off her banking lesson with Immonen, made a cross table bankshot on the 9-Ball for the match win. “The cut shot on the 9-Ball was on, but I knew she could also make the bank. Me, Charlie and Bustamante were thrilled when she fired the bank in!” said Mika Immonen. “I had this no name cue that someone gave to me awhile back, so I really needed a new cue,” said Delrosario, a graphics designer and film major.

Each student had different favorite subjects and teachers. But all twelve students unanimously agreed that the school was well worth the admission and would recommend to others.

“Mika was my favorite teacher. He fixed my jumpshot and he took the time necessary to correct flaws he saw in all the students,” explained another student.

“Francisco Bustamante is my favorite player. I wanted to develop a power break and find out what I didn’t know,” said Devin Dorosh , a college graduate working on his Masters Degree for CPA.

“Charlie’s philosophy about mental preparation was invaluable.” “He was my favorite because he is a good communicator, likable, has a good sense of humor, and no weaknesses,” said Quniones and Katz.

“I get alot out of the school myself. Having to get my thoughts in order to explain to a student is really great because it makes me focus better in my own game. And teaching is a really great craft to have,” commented Mika Immonen.

“Mika got tremendous reviews as an instructor. In fact Mika taught at our very first poolschool around six years ago, and he keeps getting better. Bustamante taught alot in Germany but in the German language during the twelve years he lived there. But in only his second time teaching in America, he made a great impact on many of the students who said his teachings changed their game and perspective.” said Charlie Williams, pro player and Founder of Predator Pro Pool Schools.

All the students and teachers were brought together for the graduating class photo. Each would leave with treasured memories of the school and their instructors. Besides the normal subjects and normal questions asked, Immonen and Williams also focused on diet and physical fitness regimen for the students. The students were also involved in heavy interaction and a large amount of playing as the instructors observed and adjusted every part of their game. The overall emphasis on treating billiards as an athletic activity and being athletes in the game. See CBS News Link on Pool as a Sport http://cbs2chicago.com/video/?id=54885@wbbm.dayport.com 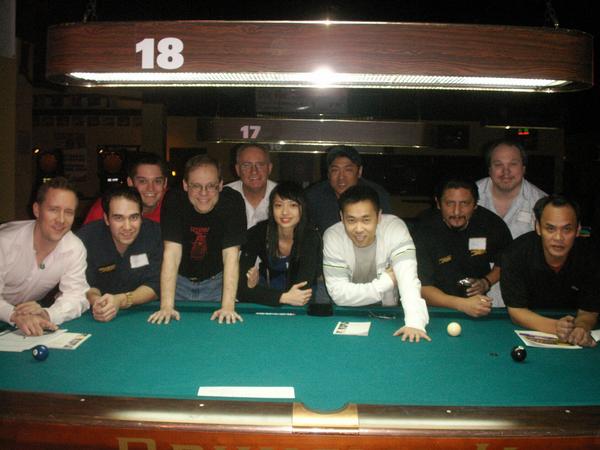 “I was very pleased with Dragon Promotions and all aspects of how they conduct business. They can use me as a referral anytime,” said Bill Wichmann, Owner of Palace Billiards.